Filters in this class are throw-away systems. Replace the entire element. They are versatile systems that serve many needs. Most of our inlines are available in the quick connect John Guest format. That means you simply push the tubing into the cartridge for a tight, secure fitting. We also stock everything in 1/4 female pipe thread versions for existing installations that need this version.

We currently stock inlines in 10″ lengths. 10″ are by far the most common. 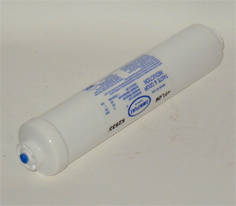 Above is our inline filter that we attach two John Guest quick connect fittings. A handy, easy to install, easy to replace filter with great versatility. It is most often used as a refrigerator filter or a reverse osmosis postfilter, but it can be adapted to any situation where a high quality granular carbon filter is needed.

Granulated Activated Carbon (GAC) has long been utilized to reduce impurities in potable water. It is widely recognized for its adsorption capacity plus its ability to reduce dissolved organics and chemicals such as chlorine. These and other impurities can cause undesirable taste, odor and color in water.

Our In-Line filter has been System Tested and Certified by NSF International against ANSI/NSF Standard 42 for the reduction of taste, odor and chlorine, Class 1.

Excerpts from an article by a water filtration expert, Gene Franks:

The largest single section in the of the “EPA Regulated Water Contaminants” published in Water Technology magazine, is the section on Organics (including VOCs, or “Volatile Organics”). In this category the EPA lists 32 very nasty chemical contaminants–many with familiar names like benzene, 1,1 dichlorethylene, carbon tetrachloride, dioxin, styrene, toluene, chloroform, and vinyl chloride. To give an idea of the extensiveness of this list, a single one of the 32 items is “Total Trihalomethanes,” a category made up of still uncounted chemicals, assumed to number in the thousands, that are formed when water containing organic matter (i. e., virtually all water) is treated with chlorine. The maximum allowable level for trihalomethanes, which are suspected cancer causers and are present in virtually all chlorinated tap water, is only 1/10 of one part per million. For the Organics category, the primary treatment in all cases and the only recommended treatment in most cases is activated carbon.

For Organics, Pesticides, and Herbicides, the standard treatment, and in most cases the only treatment recommended, is activated carbon.

When people say water filter, they most frequently mean a carbon filter of some variety, because since the Egyptians discovered that storing water in charcoal made it stay fresher and taste better, carbon has been a standard feature in water treatment. Its centuries of popularity attest to its effectiveness.

When considering an emergency water filtration system, keep in mind:

Chlorine was not considered in the discussion above because EPA does not consider it a water contaminant. Although this is patently absurd, it is also politically expedient and not likely to change soon. (Keep in mind that all EPA maximum contaminant allowables are politically negotiated figures that do not necessarily have any basis in reality. They represent a compromise between the ideal and what can practically be done by water treatment plants.) Chlorine removal is what carbon is best at, and nothing else equals carbon’s ability to remove chlorine.

Carbon filters remove chemicals by the process of adsorption (as opposed to absorption). Webster’s Collegiate Dictionary defines adsorption as “the adhesion in a thin layer of molecules to the surfaces of solid bodies in which they are in contact.” Carbon attracts certain chemicals at the molecular level much in the way that a magnet attracts and holds metal filings. When the surfaces are full, the filter must be discarded and replaced.

To summarize, carbon is an extremely versatile and highly effective water treatment medium. It has immense surface area. A single pound of granular activated carbon has a filtering surface area equivalent to 125 acres! It is the best known treatment for organic chemicals, VOCs, pesticides, herbicides, and chlorine and its by-products. It is also an unchallenged taste-and-odor improver.