Since May 2000, the U.S. Geological Survey (USGS) has published three maps summarizing a national data set on arsenic in groundwater. These maps were intended as a big-picture view of patterns in naturally occurring arsenic across the United States. But interest in using these maps for other purposes – making cost-benefit estimates for new drinking-water regulations or predicting arsenic-related health risks for different regions of the country – has been intense.

Such demand is not unusual given current interest in making policy decisions based on science. But doing so often requires that we ask broad-brush political, economic and public health questions of natural resource data collected for highly specific research purposes. Sometimes we simply don’t have the right kind of data to answer all of the questions; other times, the problem is to communicate the data in the right form.

This conundrum is particularly true for maps. Before trying to answer many different questions with one map, we should consider three “user beware” issues germane to any map of data.

Why was the map created?

The ongoing process of revising the federal limit for arsenic in drinking water is a classic example of a tangle of interrelated questions and data open to many interpretations. Widespread, high concentrations of arsenic in groundwater are generally attributed to natural sources. National regulatory and legislative bodies need to know which parts of the country have high arsenic in drinking water; how serious an effect arsenic may have on public health; and where reducing arsenic concentrations will be most costly. Maps of existing water-quality data can clarify these issues, but creating the right map is not simple.

If the question is, “Where are the most people exposed to arsenic?” the resulting map might point to areas of dense population relying on large public water supply systems. To answer, “Where are people exposed to the highest levels of arsenic?” a map might finger rural areas where private wells containing high arsenic concentrations commonly go untreated. A map answering, “Where will reducing arsenic be most costly?” could identify areas with the greatest number of wells high in arsenic; or where high arsenic occurs with high sulfate; or where drilling new wells may be required. These different “treatment cost” maps may not point to the same areas that other maps highlight to show the “most population” and “highest arsenic.”

What data underlie the map?

Two primary data sources provide information on arsenic in drinking water for the United States. Compliance monitoring programs are the first source. Public water supply systems are required to monitor for compliance with legal water-quality standards. The U.S. Environmental Protection Agency (EPA) has compiled a data set of arsenic measurements from 20,000 monitoring programs in 25 states. Leaving aside issues of data comparability, this data set provides an important basis for estimating how many public supply systems have high concentrations of arsenic, or what proportion of the urban population drinks from high-arsenic public systems.

However, no analysis of this data set can answer a slightly different question: Where in the country are the most people at risk from arsenic? The EPA data set contains no explicit information on the rural population that doesn’t use the public supply. More than 99 percent of this population relies on groundwater for drinking water. Because private wells are unregulated, no national regulatory database exists to fill this gap.

The other data source is environmental research programs. The USGS has compiled a data set of arsenic measurements from 31,000 wells and springs in 49 states. Scientists with the USGS and state agencies collected and analyzed these data mainly from private, domestic wells, as well as monitoring wells and public supply wells. These samples were collected for studies on the quality of the country’s potable groundwater resources, also called source water or raw water. Like the EPA numbers, these measurements cannot stand alone as the only source of data on arsenic in drinking water. These groundwater samples may accurately represent the drinking water used by rural homeowners and small suburbs, but may not represent urban public supply systems’ water if the utility mixes groundwater with surface water before delivering it to consumers.

Clearly, a map using just one of these data sets can answer only a limited set of questions. Combining the two data sets could provide a view of where arsenic is high in both public water systems and private wells, but still wouldn’t give a complete picture of health risks. Lifestyle, genetic and environmental factors make certain members of the population more susceptible to health effects from drinking high-arsenic water. In addition, such factors may have geographic patterns that could complicate the analysis of relationships between arsenic in drinking water and health effects. For example, smoking rates vary geographically across the country, and arsenic may not be the only contaminant occurring in a region’s drinking water.

How was the map made?

Even given a well-defined question and an appropriate data set, the visual and statistical techniques used to summarize data can make a great difference to interpretation. Often, interpreting the data requires extrapolating from discrete points to larger areas. 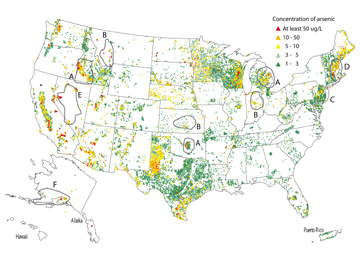 Figs. 1, 2 and 3 show three approaches to the question, “What percentage of private wells in various regions have high arsenic concentrations?” These figures use only the environmental-research data.

This hierarchical overplotting may exaggerate the frequency of high values. Thus in Fig. 1, the areas marked A appear to have more high values than the nearby areas marked B.

The approach taken in Fig. 2 is to illustrate proportions by area, rather than raw data. 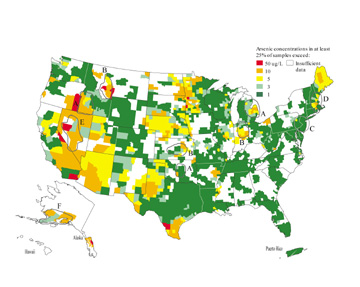 [Figure 2 is a county-based map showing the 75th percentile of arsenic concentration, computed from the 31,000 samples shown in Fig. 1(updated from Welch et al., 2000)]

This approach makes it easy to compare two regions and determine which counties have similar proportions of wells with high arsenic concentrations. Thus, Fig. 2 shows that A areas and nearby B areas actually have similar proportions of high values. At the same time, Fig. 1 and Fig. 2 both show that counties in area D have proportionally more high values than counties in area C. In this case, comparing regions is possible using either type of map. However, Fig. 2 shows that area C has a much lower proportion of high values than might be guessed from Fig. 1; the difference between areas C and D is understated in Fig. 1.

County-level arsenic summaries can link to existing county-scale health databases and population statistics. Unfortunately, the boundaries of counties and other sociopolitical mapping units don’t necessarily fit natural phenomena or available data. Groundwater flow systems don’t stop at county boundaries. Counties also vary in size and shape. Five water samples may tell something about a 350-square-mile county in the Northeast, but be inadequate for a 20,000-square-mile county in the West: the data densities are unequal. For example, Fig. 1 shows relatively sparse data in areas E (central Nevada) and F (Alaska, not shown to scale); but any statistic computed from those few data points gets applied to an enormous area in Fig. 2 due to the huge size of counties in these states. Computing proportions is helpful, but to compare regions of such unequal sizes remains difficult. 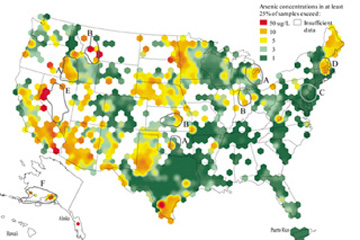 One way to solve the problem of varying region sizes is to impose an equal-area grid on the data. Grids can be many shapes. Fig. 3 uses equal-area hexagons 100 kilometers across – the median size of a U.S. county. Like Fig. 2, the 75th percentile of arsenic concentration was computed only for hexagons with a minimum data density of five wells per hexagon. To improve on Fig. 2, Fig. 3 shows a moving 75th percentile that has been “smoothed” across hexagon boundaries based on neighboring values. Using equal-area hexagons makes the data densities more comparable among regions, and the smoothing prevents the artificial “jumps” in concentration that occur between counties in Fig. 2.

[Figure 3 is a data-density-based map showing a moving 75th percentile of arsenic concentration, computed from the 31,000 samples shown in Fig. 1]

Examining each area’s appearance on all three figures, Fig. 3 answers such questions as, “Where in the country might at least 25 percent of wells have high arsenic?” more precisely than would Fig. 1 or 2. However, improving the mapping technique to better fit the question comes with an important trade-off. In discarding county boundaries, some functionality is lost: Fig. 3 is more difficult to directly relate to county-based population and health statistics than is Fig. 2.

Any single map that attempts to summarize an entire national data set is necessarily a limited view. Each arsenic map the USGS released last year provides a big-picture view, but a closer look at any smaller geographic area quickly finds exceptions to national patterns. Areas of southern California have high arsenic in groundwater, but the city of Los Angeles relies primarily on surface water. In Minnesota, the data set includes arsenic measurements from many different aquifer systems, and this map ignores these differences. In New England, most of the arsenic data shown are from bedrock aquifers used by private wells. This dataset does not account for glacial aquifers used by public water supplies.

National-scale maps serve an educational purpose and stimulate discussion, but are not well suited to local planning. As with many generalizations, these maps are better at starting debates than ending them.